The Goal: A Process of Ongoing Improvement by Eliyahu M. Goldratt and Jeff Cox 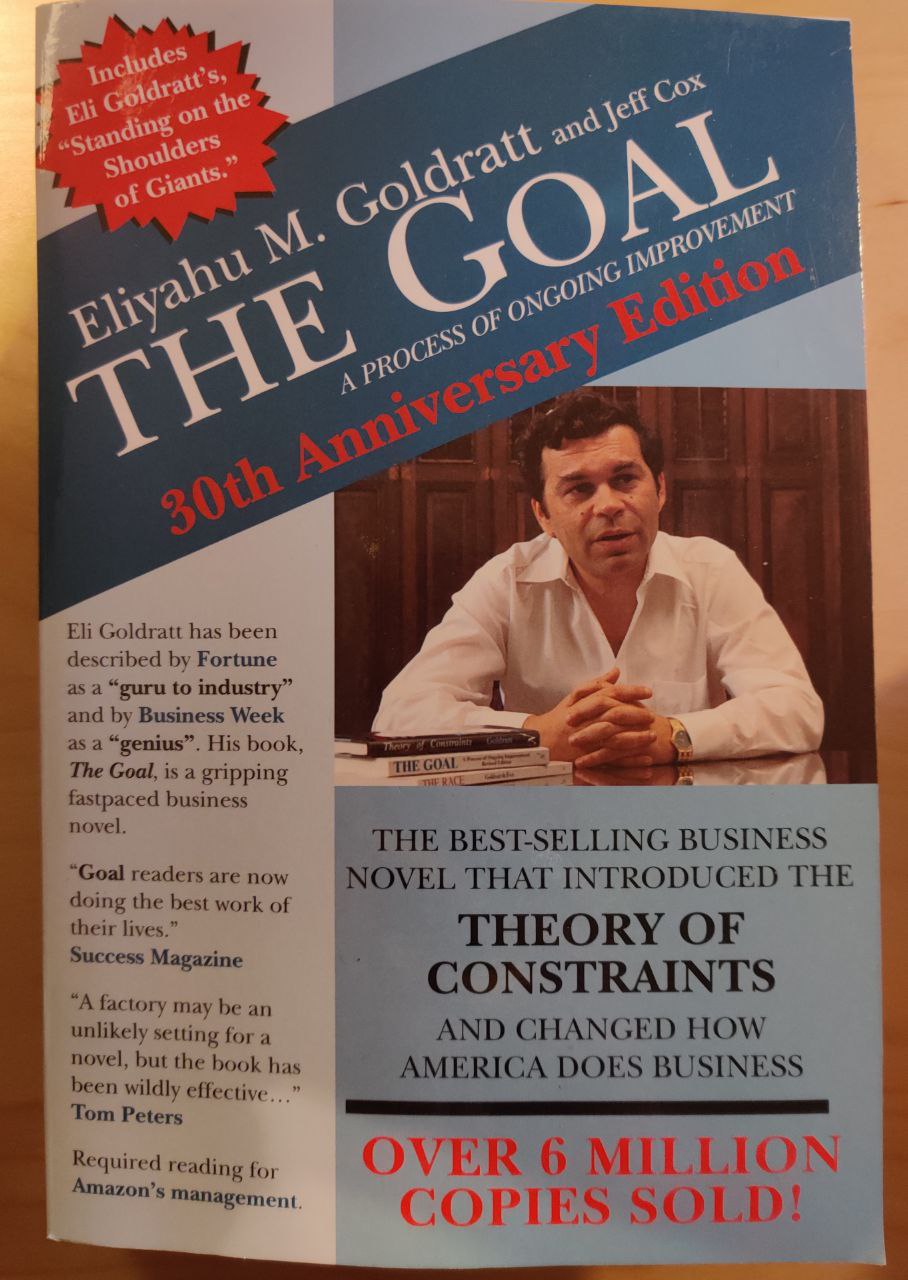 Science works. That’s the only explanation I can find for 6+ million sales of a book sporting the cover so highly reminiscent of some horrible powerpoint slides.

Having read this book I now understand what “The Unicorn Project” tried to do or emulate. On the surface, there are many similarities between The Goal (first edition 1984) and The Unicorn Project (2019). Both are business novels, that is, works of fiction written to describe non-fiction approaches to a certain kind of a business problem. Instead of chapters with telling names and bullet points, the lessons that the author wants to impart are presented in a format of a story with a protagonist, dialogue, and so on.

The protagonist in both books is tasked with turning a complex situation around. Only in The Goal it’s a man who has been at the helm of the sinking ship for some time (Alex), while in The Unicorn Project it’s a woman who comes in and is appalled at the depths to which these idiots fell (Maxine). Alex' motivation is that he cares for the town he grew up in, and his plant (on the brink of being closed down due to negative cash flow) is a big employer there. In three months, he and the people he works with could all very well be out of a job. As for Maxine, she’s irritated that someone did not install some particular tools on her new work computer, and she’s bored because nobody can give her a task to work on or the access she needs to do anything meaningful. Somehow I was immediately more invested into Alex' story. He’s also just more realistic of a character: when he freaks out in a meeting and slips out of it to get drunk, eat pizza, and take stock of his options, it makes sense. When he is caught up with the trouble at work and forgets about his wife and two children, they do not behave like some angelic pieces of painted cardboard — it’s divorce that’s being considered after a while.

Another superficial similarity is the presence of a guy who already knows all the answers and shares his wisdom with the protagonist. In The Unicorn Project, he’s always there and talks in infodumps. In The Goal, he’s only in a few scenes, more often asking questions than giving answers, and (spoiler alert) in the end his ultimate message is “you’re supposed to be able to figure things out, not run to me any time you’re wondering about something”. As a coach, or a mentor, or whatever he would be called, he’s making himself obsolete, and he’s forcing the protagonist to become better and better at solving bigger and bigger problems without relying on a cheat sheet.

While it still shows that The Goal is a business novel and not necessarily a novel one would enjoy just for the sake of its writing, it’s easy to read. It does not go too deep into the terminology or technical specifics of the business in question, which is a manufacturing plant. Concepts like a bottleneck or inventory are easy to transplant onto whatever industry the reader is working in, and the problems solved are not about particular machines but about people and the way they do things.

And of course people are pretty stuck in the way they do things, and the way they think about work. In addition to solving the problems on the shop floor, Alex needs to deal with irrelevant metrics, KPIs, and goals, that everybody else in the management is used to. He also needs to deal with his own inertia and falling back to the old thought patterns, navigating the uncertainty and getting his coworkers on board. Repeatedly.

There are successes and missteps as Alex and his team figure out how to improve the flow of the product through their plant, why is having a ton of stuff in stock is not an asset but rather the opposite, how to improve the flow again because their prioritization system was wrong, and so on. As in real life, solving some issues only opens up opportunity to fix other ones, often more complex. Alex' work is never done, and I’ve heard there is a sequel to The Goal. I haven’t read that one, but there was a curious addition to my edition of The Goal: an essay called “Standing on the Shoulders of Giants”. It was of special interest to me since it mentioned the Kanban system a lot, and Kanban has become very popular in IT in the past several years.

For the systems not enjoying the same kind of stability as Toyota, Goldratt suggests to do with time what Ford did with space and Ohno did with inventory. This application’s implicit assumption is that the touch time (when the product is being worked on) is less than 10% when compared to the current lead time (when we’re waiting and queuing). In other environments the touch time is actually way longer, the lead times are promised to be just twice as long, and nobody expects to get it completed on time, on budget, and in full. The approach called “critical chain” is supposed to help with those, but that’s the name of another book.