The Culture Code: The Secrets of Highly Successful Groups by Daniel Coyle 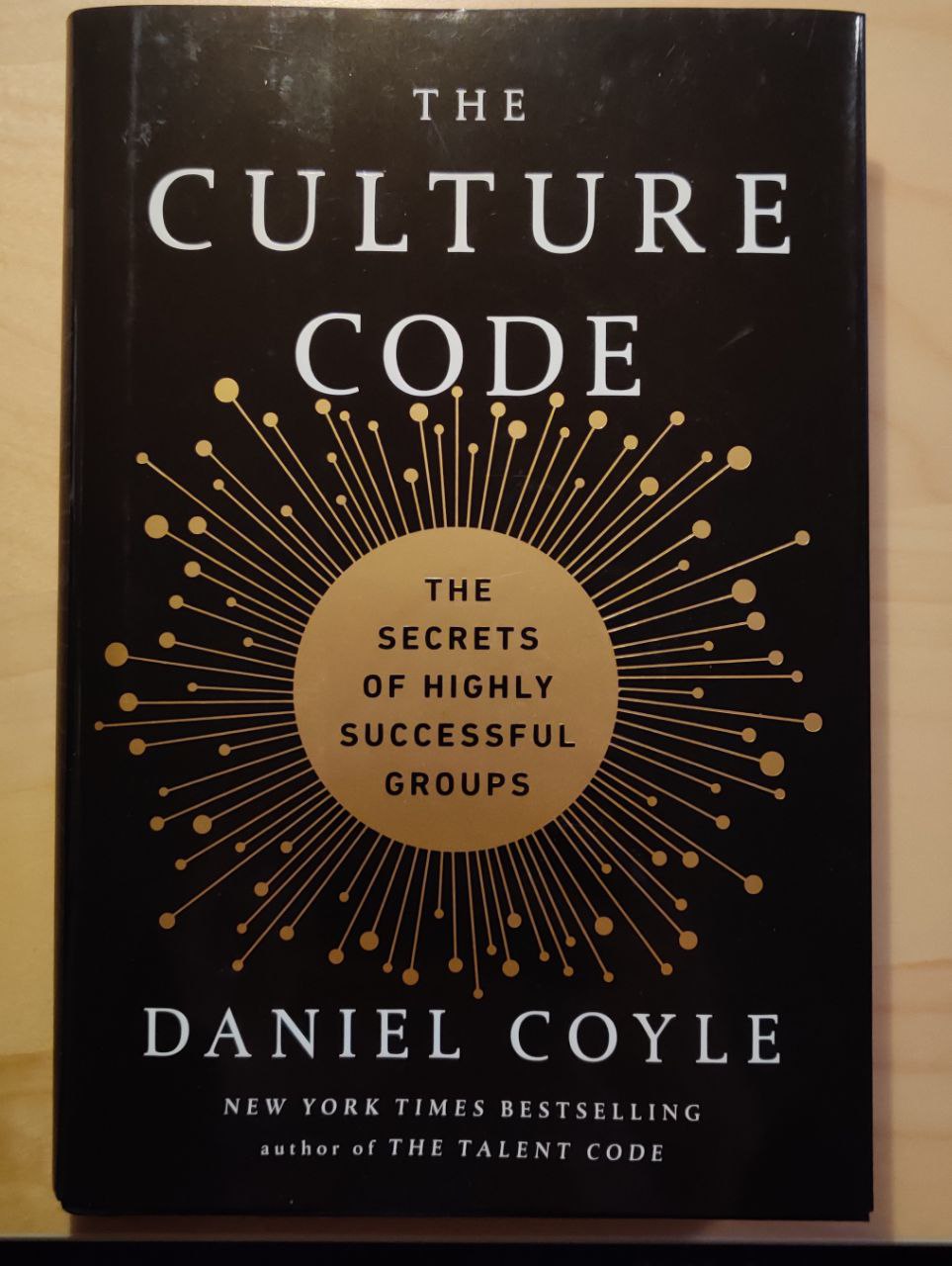 As far as management books go, this is not a bad one. It did color my hands with black paint when I attempted to take it out of its dust jacket though.

Like many other books on this topic, this one presents a series of anecdotes and then tries to derive some heuristics/advice out of them. Unlike most of these books, “The Culture Code” gives references to other sources, including papers. The author explains how he chose the groups to investigate, even mentioning selection bias. He also does not repeat every piece of advice twenty times.

The introduction already gives a feeling for the general direction of the advice that follows. It recounts a series of competitions between four-person groups carried out in places like Stanford and the University of Tokyo. In those competitions, children (kindergartners, to be precise) outperformed business students, lawyers, and, by a smaller margin, CEOs. Supposedly it was because the children just tried things out together while the adults were busy with status management — i.e. questions like who’s in charge, is it okay to criticize that person’s idea, what are the rules.

The first big topic in the book is psychological safety. An experiment from 2006 demonstrates how just one “bad apple” can bring a group’s productivity down. “Bad apple” here means someone who’s exhibiting one of the three negative archetypes: the Jerk (aggressive, defiant), the Slacker (doesn’t put in effort), or the Downer (depressive). If one person behaves like that, the rest follow, unless there’s somebody actively counteracting it by deflecting the negativity and making the situation feel solid and safe again by constantly sending out so called belonging cues.

Belonging cues are behaviors that create safe connection in groups. They include, among others, proximity, eye contact, energy, mimicry, turn taking, attention, body language, vocal pitch, consistency of emphasis, and whether everyone talks to everyone else in the group.

The book then quotes several small experiments which imply that words, numbers, and facts mattered less than belonging cues for a variety of decisions (although the participants were usually good at rationalizing their choices afterwards).

“They’re just words”. This is not how we normally think. Normally, we think words matter; we think that group performance correlates with its members' verbal intelligence and their ability to construct and communicate complex ideas. But that assumption is wrong. Words are noise. Group performance depends on behavior that communicates one powerful overarching idea: We are safe and connected.

The first poster child team in this part of the book is Google, namely with the story of Larry Page scribbling a “these ads suck” note and putting it in the office kitchen just for Jeff Dean to notice it and make AdWords successful.[1] The author suggests that Google’s small building produced high levels of face-to-face interaction, while Page’s technique of igniting whole-group debates sent a strong signal of identity and connection. The next example is far from Google — trenches in World War I and the spontaneous Christmas truces that happened there. The author says it was also about the belonging cues and a constant stream of interactions.[2]

The suggestion to make it happen in your team is to give the cues of:

A successful basketball coach implements them as follows:

The examples continue. From Zappos we learn about the importance of the serendipitous personal encounters, and their leader’s job being “to architect the greenhouse”. His way of onboarding people into a project is giving them a list of someone to meet and to ask “whom else should I meet”.

The ideas for action from the first part are:

Part 2 is called “sharing vulnerability” and starts with an aircraft flight gone wrong. The crew handles it through, well, collaborating and not managing status. We also get a look at the SEALs training, group comedy improvisation, and others. Each of the groups has an uncomfortable but rewarding way to talk about what’s wrong and to share the responsibility.

Ideas for action from part two:

The third part is “establish purpose”. With examples like Johnson&Johnson and surgeons, the author goes into the topic of spreading out the decision-making. If the ground values of the group are established in a simple enough form that everyone knows about, the local decisions smoothly contribute to the defined greater good.

With the help of a successful family of restaurants in competitive New York the book demonstrates how to lead for proficiency. With one restaurant, it was enough for the owner to always be there and direct, but with two, let alone twenty-five, he needed an aid in the form of maxims (or they can be called catchphrases or mantras). Phrases like:

Those are small narratives reminding a group member of a particular mental model for solving the problems they face in their day-to-day work. Here’s a summary of a doctoral student in organizational behavior that studies these restaurants:

The results indicate that Union Square Cafe achieves its differentiation strategy of ‘enlightened hospitality’ through a synergistic set of human resource management practices involving three key practices: selection of employees based on emotional capabilities, respectful treatment of employees, and management through a simple set of rules that stimulate complex and intricate behaviors benefiting customers.

This last bit reminded me of emergent systems discussed for example in “Complexity: The Emerging Science at the Edge of Order and Chaos” and “Scale: The Universal Laws of Life, Growth, and Death in Organisms, Cities, and Companies”. One can not scale through command and control. This is sort of an answer to the question of “how to keep the spirit of a startup when your company is growing and you as a founder can’t be everywhere”.

At first encounter and from a distance, this sounds corny, but when you’re in it, you’re in it.

Leading for creativity is different from leading for proficiency. First, the structure for such a group is usually physically distant from the parent group, nonhierarchical, and given maximum autonomy. The book illustrates with Pixar and Walt Disney Animation Studios but mentions Skunk Works, Google X, Procter&Gamble’s Clay Street, Mattel’s Project Platypus, and others.

There are catchphrases here too, but they’re meant less for knowing exactly what to do and more for discovering it by yourself. The leader of that restaurants family is compared to a lighthouse beaming signals of purpose, while Pixar’s Catmull is said to be more like the engineer of a ship, roving around belowdecks, checking for leaks, adding a little oil here and there. Celebrating when a group takes initiative without asking permission.

When he was charged with turning around Disney, he started with bringing people physically closer, and then proceeded to removing power from the executives and giving it to the directors. Executives were now supposed to support. The next films that Disney produced (Tangled, Frozen, Zootopia) were made by the same people as Treasure Planet and Home on the Range, but they were interacting in a new way.

Ideas for action from the last part of the book:

The book ends with the author applying what he learned with a team of (very) young writers. He struggles with coaching in the way that the book preaches, admitting it was more demanding, required more reflection and fighting with the challenge of not doing things. But it was also easier, guiding instead of conveying knowledge (which requires loads of preparation). And it pays off (gasp! sorry for the spoiler).

In general, I found this book better structured and cross-referenced than many others that would stand on the same shelf in a store. It was also precious to see a few examples of a failing culture, not just one successful anecdote after the other. It would be great to see more books from this perspective: defining what is a successful X, then going there, observing it, making connections to the existing body of research, trying to find other natural experiments proving that a factor is sufficient and necessary, and so on.

1. it is worth noting that since then Google’s culture has changed; see this Wired story or look up Google employees walkouts, censored search results in China, Diane Greene, and Algorithmic Warfare Cross-Functional Team.
2. But of course when the generals found out about it, it was easy to disrupt. Raids were ordered and the troops were rotated. Next Christmas everyone fought as expected. I guess this says something about companies with low retention.