Team of Teams: New Rules of Engagement for a Complex World by Stanley McChrystal 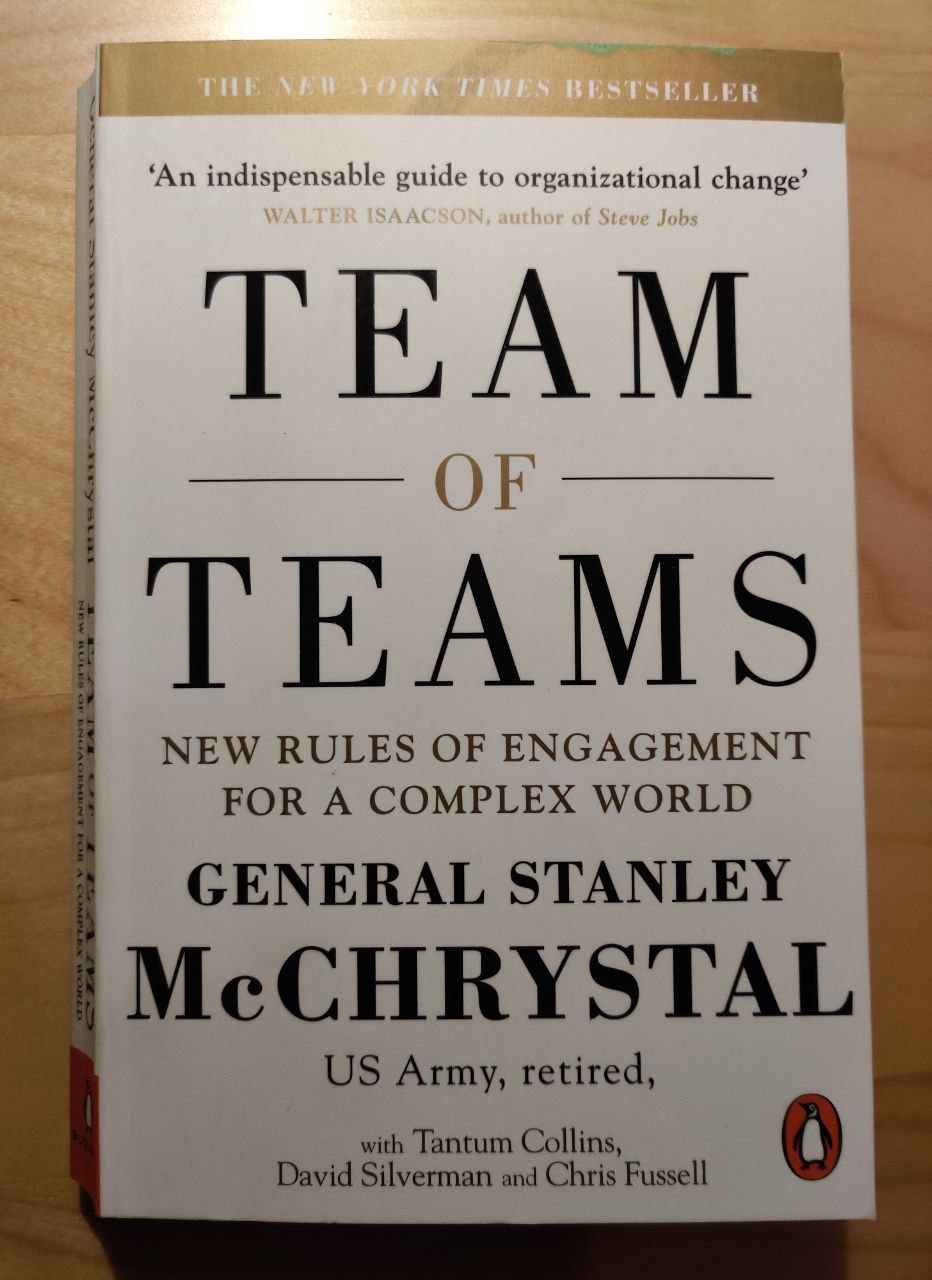 Yet another book on management with a bunch of anecdotes and advice following from them, this time from a retired US Army general, and the three people who helped him out with writing.

The red thread of the book is the story of the Joint Special Operations Task Force failing hard in Iraq in 2003 despite being oh-so-brilliant and oh-so-excellent. Sarcastic reaction to the american military self-congratulation aside, they did have more resources in every meaning of the word. But, the author explains, they were very “command-and-control”, while their opponent had a network structure, and that network adapted and moved at a speed that the general’s forces just could not match. And so he rebuilt them into a network too.

At its worst, this book reminded me of Extreme Ownership. At its best, it was close to the topics in The Culture Code. Same or similar stories are brought up: pilots of a failing aircraft, soldiers in the Navy training, surgeons forced to be part of the team rather than its commanders.

When it’s telling a story from the battlefield, this is the tone:

A code word, delivered with the callous finality of a voice that had issued dozens of similar commands before, crackled across their radios. The first Hyundai driver took a breath, and ground the accelerator into the floor.

Just to point it out, none of the writers or people they know were in that Hyundai or with those radios.

Big Data will not save us because the same technological advances that brought us these mountains of information and the digital resources for analyzing them have at the same time created volatile communication webs and media platforms, taking aspects of society that once resembled comets and turning them into cold fronts. We have moved from data-poor but fairly predictable settings to data-rich, uncertain ones.

Taking a cheerful example of a self-immolation that occurred in Tunisia, the authors argue that while Big Data can predict a lot about an average or most likely case, it will not help with spotting one divergence from the expectations that will have an exponential impact.

Similarly, management thinker Gary Hamel writes that companies now find themselves in “ecosystems” and “value webs” over which they exert almost no control, giving them little ability to predict or plan their own destinies. In such settings, the ritual of strategic planning, which assumes “the future will be more or less like the present,” is more hindrance than help.

The titular team of teams is discussed in Part II among other things. The solution that the authors found to be working to create trust across big organizations is liaisons. Basically, you take one person from your team (and it better be top talent, not someone whom you can spare the easiest) and you send them to work with another team for a little while (weeks). Now that team has a face in their mind, and if the job is done right, trust is established. When they send their team member to you, the circle is complete, and the silos are broken.

Part III is about transparency and sharing both information and power. Everyone should understand the big picture to make the right decisions and to share the key information with the others. Thus, for example, all-hands meetings can be introduced, where people doing the actual work on the ground are encouraged to present and are asked for their opinion, not just reports, and everyone can address an uncomfortable question directly to the highest levels of management.

In time, people came to appreciate the value of systemic understanding. O&I attendance grew as the quality of the information and interaction grew. Eventually we had seven thousand people attending almost daily for up to two hours. To some management theorists, that sounds like a nightmare of inefficiency, but the information that was shared in the O&I was so rich, so timely, and so pertinent to the fight, no one wanted to miss it. […​] If an individual had a four-minute slot, the “update” portion would be covered in the first sixty seconds, and the remainder of the time would be filled with open-ended conversation between the briefer and senior leadership (and potentially anyone else on the network, if they saw a critical point to be made). Instead of black-and-while lines of questioning (“How many x?”), our dialogue became interactive and broad (“Why are you thinking x?”).

These meetings also helped relieve the tension around shared resources.

When they understood the whole picture, they began to trust their colleagues. […​] Previously, the world outside of a commander’s domain looked like a black box; once an asset left, it was just gone. Once they could see why and how their assets were being used, however, and once they knew and respected the other individuals handling these tools, things changed.

Before, these decisions took place behind closed doors. Now, the resourcing conversations sometimes occurred right in front of them during an O&I. […​] With that awareness came a faith that when theirs was the priority mission, they would get what they needed when they needed it.

Snowden and Manning are brought up in an interesting context. While discussing the practice of bringing down “need-to-know basis” and ensuring people have better access to information, the authors address the potential downsides of such an approach.

Should better defenses have been in place to prevent this information from being copied by Manning? Certainly. Should blank CDs be disallowed in a Secure Compartmentalized Information Facility? Obviously. Should superiors have intervened and prevented Private Manning from deploying to Iraq based on a history of behavioral issues in the Army? Without a doubt. Did Private Manning put lives at risk? Yes. But was it a mistake to design a system that gave privates and specialists access to extensive and valuable data? Absolutely not.

Massive leaks are not an inevitable consequence of the current level of information sharing, but even if they were, the benefits vastly outweigh the potential costs.

In Part IV, we get into the territory of less micromanagement and more environment-caring:

Paradoxically, the seemingly instantaneous communication available up and down the hierarchy had slowed rather than accelerated decision making. Leaders who could be contacted in moments felt compelled to withhold authority on decisions of significant importance (or for which they might ultimately be held responsible). […​] Communications may have been instantaneous but decisions never were. The aggregate effects were crippling.

A curious difference between the Navy and the Army is highlighted. Back in the day, you couldn’t communicate with a ship at sea, so the commander of that ship had to be given enough power to accomplish their mission. Not so on the land: the commanders received instructions on what to do and how to do it, and the progress in technology enabled more and more visibility and control over the execution. Since then, the technology has encompassed the sea as well, but a small vestige still exists:

“Command by Negation,” a concept unique to naval command and control, allows a subordinate commander the freedom to operate as he or she thinks best, keeping authorities informed of decisions taken, until the senior overrides a decision. The Navy is the only service that uses the acronym UNODIR (Unless Otherwise DIRected), by which a commanding officer informs the boss of a proposed course of action, and only if the boss overrides it will it not be taken. The subordinate is informing the boss, not asking permission.

When led this way, people learn to become leaders themselves. That’s apparently exactly what Admiral Nelson did, and it made him win even in his death:

“To any other Nation the loss of a Nelson would have been irreparable,” said French vice-admiral Villeneuve, after the battle, “but in the British Fleet off Cadiz, every Captain was a Nelson.” We wanted our force to exhibit the entrepreneurial mind-set of those British captains, so we nurtured holistic awareness and tried to give everyone a stake in the fight. When we stopped holding them back, […​] they thrived.

The comparison of the Navy vs the Army and the observation that traditionally, organizations implement as much control over subordinates as technology physically allows, remind me of a difference between working remotely and at the office.

The last, and smallest, part is dedicated to the summary of everything that came before it and suggests that the whole world is moving towards a more fast-paced, interconnected, and complex state, where the lessons learned by the authors are indispensable for any group, organization, or person.

The lessons boil down to this: change your culture by adding a shared consciousness (extreme transparency and information sharing) and ensuring empowered execution (decentralize authority). Both components need to be there, neither would suffice alone.

1. for a first-person account on additional small details such as war crimes and the quality of contractors' involvement, see e.g. Permanent Record