Scale: The Universal Laws of Life, Growth, and Death in Organisms, Cities, and Companies by Geoffrey West 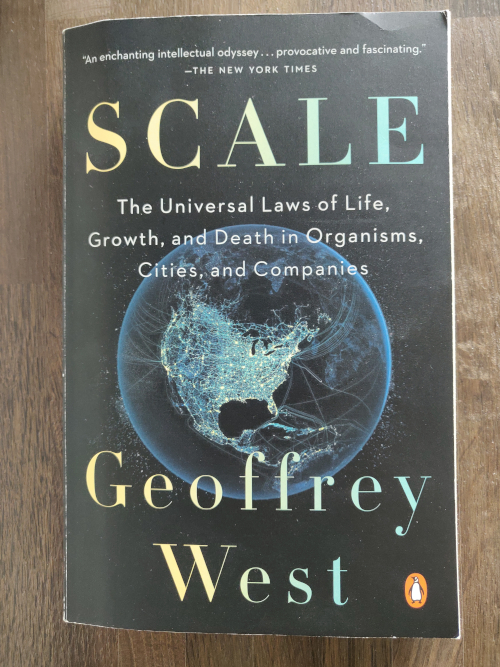 A delightful book about complexity theory by a scientist from the Santa Fe Institute.

It’s one of those perfect non-fiction books that don’t assume much about the reader’s knowledge and manage to simplify but not dumb down.

The author describes his and his colleagues' work on figuring out the mathematical laws in the traditionally soft or descriptive parts of biology, economics, and business.

First, he introduces complexity, linearity, approaches to scaling; eventually, he considers mammals. Why can’t Godzilla ever exist? Because, as explained by Galileo already, when something is increased in size, its volume grows way faster than its areas. Volume and weight are connected, so Galileo illustrates this as follows:

The smaller the body the greater its relative strength. Thus a small dog could probably carry on his back two or three dogs of his own size; but I believe that a horse could not carry even one of his own size.

And the Godzilla would not even be able to carry itself on its legs.

If we look at Godzilla’s (or an existing mammal’s) organism, we’ll find a network. And not just any network. The comparison of blood vessels to the infrastructure of a city or to branches of a tree is pretty commonplace, but “commonplace” is not exactly good enough for mathematics.

So what kind of networks are these? The author and his colleagues have discovered the following interesting properties:

It gets even more interesting with fractals and their self-similarity and weird dimensionality mixed in.

These network properties and their effects then get slowly discussed in application to three areas: mammals, cities, and companies.

For mammals, we find out things like why they eventually stop growing (the rate at which energy is needed for maintenance of the cells increases faster than the rate at which metabolic energy can be supplied → less and less energy left for growth) and why larger ones live longer (the leading causes of death are related to the damage at the cellular and intracellular levels, which occurs uniformly throughout the organism; cells in larger animals are systematically processing energy at a slower rate than cells in smaller ones, so they suffer less damage at a slower rate).

For cities, it is about the physical infrastructure (a city twice as large does not need twice as much roads or gas stations, it needs less) as well as the people (innovation, crime, GDP, disease — all increase faster than linearly). It’s not as easy to pinpoint what exactly are the social networks in the city optimizing, but there’s plenty to explore. There is, for instance, a discussion of increased pace of life — diseases spreading faster, businesses being born and dying more often, and people on the streets walking at a more brisk pace (by 15% more, on average, although obviously limited by the human physical ability). Going back to the question of growth and mortality, cities don’t die nearly as often as mammals, because the supply of (social) metabolic energy generated by cities as they grow increases faster than the needs for its maintenance.

Companies get the smallest piece of the space in the book. There is the least data about them, and they haven’t existed for as long as the other subjects. In terms of growing and dying, they’re not exactly like mammals and not exactly like cities: their metabolic rate is neither sub- nor superlinear but falls right in the middle. The difference between sales and expenses eventually just scales linearly. Fun fact: according to the Bank of Korea, of the 5586 companies that were older than 200 years in 2008, 3146 were Japanese, 837 German, 222 Dutch, and 196 French. 90% of those older than 100 had fewer than 300 employees.

Companies die a lot — the half-decay time is around ten years. In contrast to them, cities can raise taxes instead of declaring bankruptcy, operate in a more distributed fashion (no single group has absolute control, really), and take advantage of the innovative benefits of social interactions. They are “places of action and agents of change relative to companies, which by and large usually project an image of stasis unless they are young”.

An aging company introduces rules, constraints, and bureaucracy at the expense of research and development, becoming more rigid. The cities on the other hand just become more diverse as they grow, increasing their spectrum of business and economic activity.

In the end, it comes to the question of infinite growth. Already in the middle of the book, the author quotes Kenneth Boulding saying

Anyone who believes exponential growth can go on forever in a finite world is either a madman or an economist.

The growth of organisms, cities, and economies was shown to be governed by essentially identical mathematical equations, but the equations have different solutions due to the fact that some systems exhibit sublinear scaling and others — superlinear. In the superlinear case, it turns out, the general solution to this kind of equation has a technical property called a “finite time singularity”, which means that a thing that grows like that will become infinitely large at a finite time. That’s impossible, which raises an obvious question.

The answer is that the system would collapse. To avoid that, a paradigm-shifting innovation is required. It will reset the clock (and the superexponential growth trajectory), but since it starts off from an already high point, the next singularity-avoiding innovation will need to come sooner than this one did. Examples of such innovation are the discovery of iron, steam, coal, computation, and digital information technology. Can humanity innovate fast enough?

One of the simple but useful takeaways from the book is about comparisons. A “linear assumption” — that is, assuming that some metric scales linearly with the size — is often implicitly included in all sorts of rankings. Consider GDP: if city A is twice as large as city B and has twice as big of a GDP, city A is actually underperforming (since usually the superlinear scaling gives more than 1-to-1 effect as the city grows). Same happens in weightlifting and other areas.

Amusingly from this point of view, New York City as a whole turns out to be quite an average city, marginally richer than its size might predict (rank 88th in income, 184th in GDP), not very inventive (178th in patents), but surprisingly safe (267th in violent crime). On the other hand, San Francisco is the most exceptional large city, being rich (11th in income), creative (19th in patents) and fairly safe (181st in violent crime).

Another takeaway is a bit on the meta side — the afterword talks about the Santa Fe Institute and how the scientists from very different fields can achieve great things together, as well as innovation and research organizations in general, and what makes some of them successful. When assuming the leadership of the Santa Fe Institute, the author took inspiration in this quote about Max Perutz (a Nobel Prize winner and organizer of the great Medical Research Council Unit):

Impishly, whenever he was asked whether there are simple guidelines along which to organize research so that it would be highly creative, he would say: no politics, no committees, no reports, no referees, no interviews; just gifted, highly motivated people picked by a few men of good judgement.

This is a great transdisciplinary book that showcases the scientific spirit, and I would heartily recommend it to anyone interested in how the world works. The notes at the end are a treasure trove for books to read next.

See also: “Complexity: The Emerging Science at the Edge of Order and Chaos” by M. Mitchell Waldrop.