How to Be a Leader by Plutarch: selected, edited, and introduced by Jeffrey Beneker 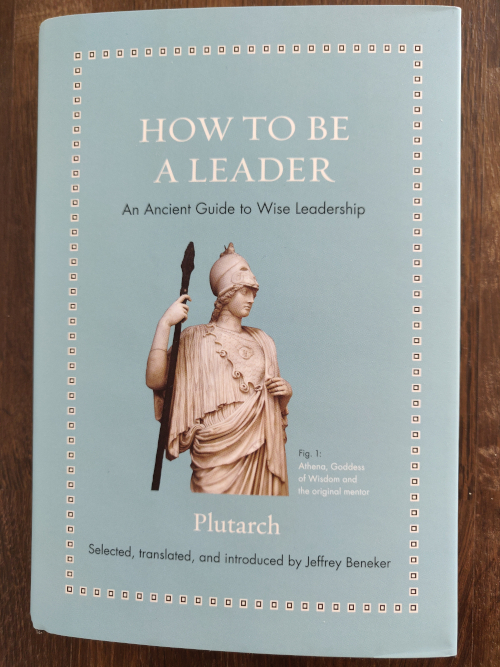 I’m not yet out of my mind enough to give a rating to Plutarch; the edition, on the other hand, is something else entirely. The book contains just three essays. Half of the pages are occupied by the Greek originals and ample empty space. Best of all, the editor actually put subheaders into the essays in case Plutarch was not good enough at structuring his thoughts for the reader, I guess. Abundant footnotes were very welcome though.

Editing aside, this is a classic text with a myriad of references to the kings and politicians of the ancient age which deals with eternal questions like: how to be a good leader? what about if you’re just starting out? what about if you’re old? Unlike some self-help books which spread one thought on 300 pages, Plutarch usually uses a couple of sentences instead.

On sharing power with your reports:

When his wife reproached him with the complaint that he would leave to his children an office that was weaker than the one he had received, he replied, “Actually it will be stronger, to the same degree that it is more stable”. For by letting go of the excessive and absolute character of his office, he escaped envy and so avoided danger.

On difference between a good leader and a bad one:

On promoting the wrong people:

Fortune, likewise, after elevating uneducated and unlearned people to even slight prominence through some wealth or glory or political office, immediately makes a show of their downfall. Or to put it another way, when jars are empty you cannot distinguish between those that are intact and those that are damaged, but once you fill them, then the leaks appear.

On becoming a leader of a particular group:

Just as wine at first is controlled by the nature of those who are drinking it, but then stealthily, by warming and mixing into the drinkers' bodies, comes to control the drinkers' character and to change their state, so politicians, until they have established themselves through reputation and trust as steady guides, must adapt themselves to, and work with, the existing character of people, understanding what pleases them and how they are naturally suited to be led.

On downsides of being in a leadership position:

Seleucus said repeatedly that if the people only knew how much effort he expended just to write and read all his letters, they would not even bother to pick up a crown that a king had cast aside.

And on doing middle management wrong:

Although we must make our cities obedient to those in authority, we must not humiliate them in the process […​] Some civic leaders do this, however, by referring matters great and small to Roman governors and so bringing the reproach of servitude upon their city. Or rather, they utterly destroy their political systems, making them hesitant, fearful, and entirely powerless. […​] some politicians seek the Romans' judgment about every decree, council meeting, civic honor, or administrative action. In doing so, they compel their governors to become their masters, even against their will.