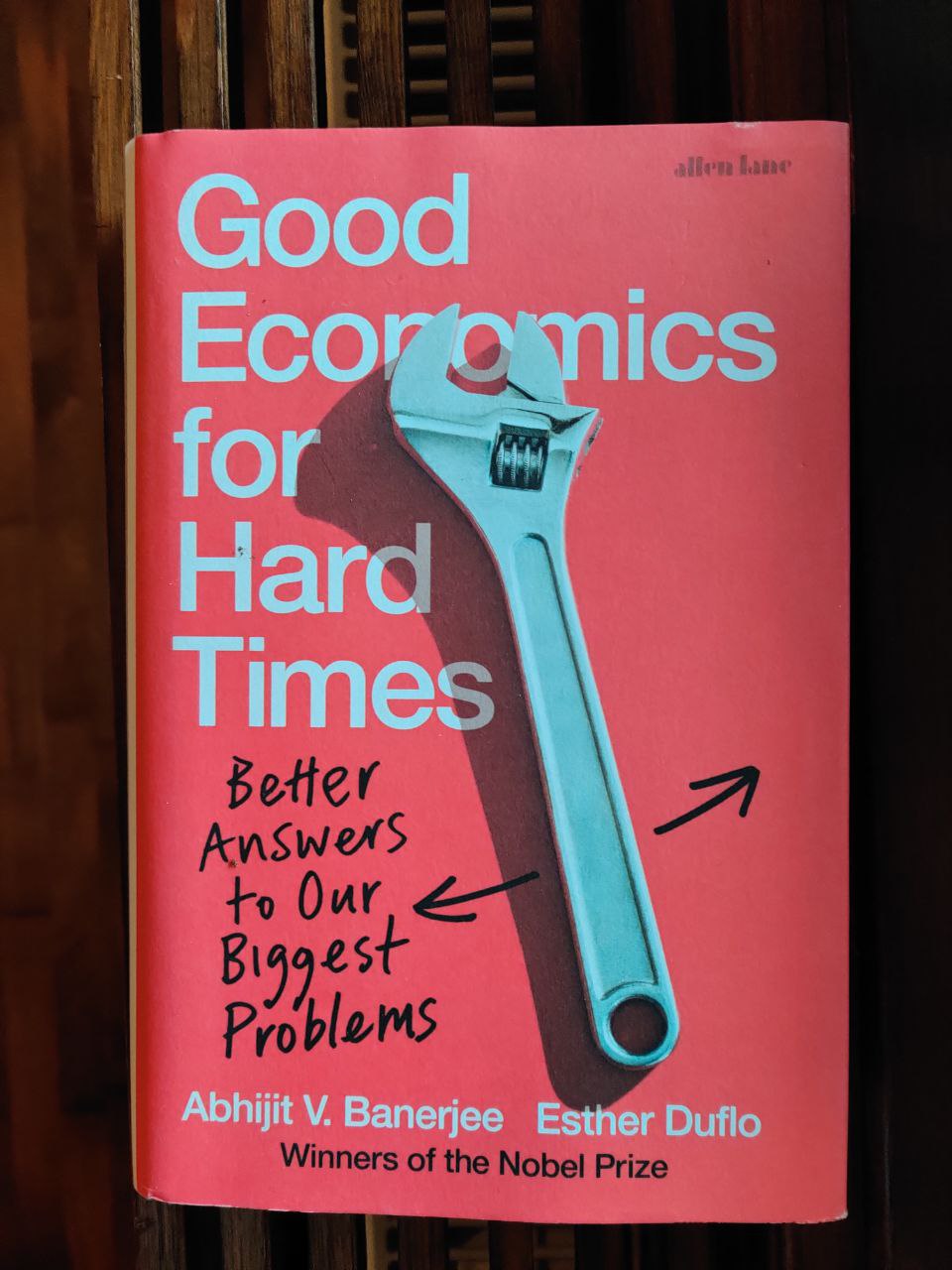 Why does the cover of a book written by two winners of the Nobel Prize have a wrench being used to wiggle a letter ‘o’? I don’t know, it’s a mystery. A lot about this book is a mystery to me by now since I’m writing this review based on a handful of notes I left in the book when I read it in November. The overall impression I’ve retained is that the questions brought up in the book were more interesting than the answers, and that I don’t want to pick up another book by these authors.

In the introduction, they make a point of the low trust the public has towards economists.

just 25 percent of people trusted economists about their own field of expertise. Only politicians ranked lower.

They describe their fellow economists as people rarely reaching any consensus, then separate people posing as economists in the public discourse from proper economists from the academia, and say that unfortunately these two groups look alike to the public (what difference does it make though if we’ve just established the public doesn’t give a damn?). Then even within the academic ranks…​

There are of course those who do speak out, but they tend to be, with important exceptions, those with the strongest opinions and the least patience for engaging with the best work in modern economics.

Of course, this book is not like the other girls™, and promises to provide “a report from the trenches where [the] research happens”, to reveal “what does the best economics of today tell us about the fundamental issues our societies are grappling with?”. At least it takes up a good life, and not just income, as a notion to be guided with when discussing these fundamental issues.

And what are the issues taken up? Immigration, global trade, prejudice, growth, climate change, artificial intelligence and jobs, inequality and government intervention, and finally welfare.

The answers to all of them sound kinda…​ leftist, for better or worse. E.g., to alleviate the bad effects of the global trade we should tax those who win from it and redistribute the winnings to those who lose out. To deal with the robots taking our jobs, the government should subsidize education and child care.

While I have nothing against subsidizing child care, I can imagine how aggravating or at least suspicious this book might be for a stereotypical republican in the US. Despite the authors bringing up tons of studies, there are just not that many randomized controlled trials on the subjects like immigration or global trade. So a lot of what they write about, a lot of the explanations they give to preconditions and outcomes in various countries, they’re just as good of a guess as any other.

The book is quite entertaining since it provides many, many anecdotes related to current hot topics and makes one think about possible explanations or patterns in those anecdotes. But it does not really have answers to anything, just more fuel for endless debate.