TL;DR: a thorough journey all the way from the workings of visual perception to information design genres to typography and even to design workflow. Rich in illustrations, footnotes and references. Similar to books by Tufte, except it’s not by Tufte but by two Finnish designers who founded their own studio and teach at universities. 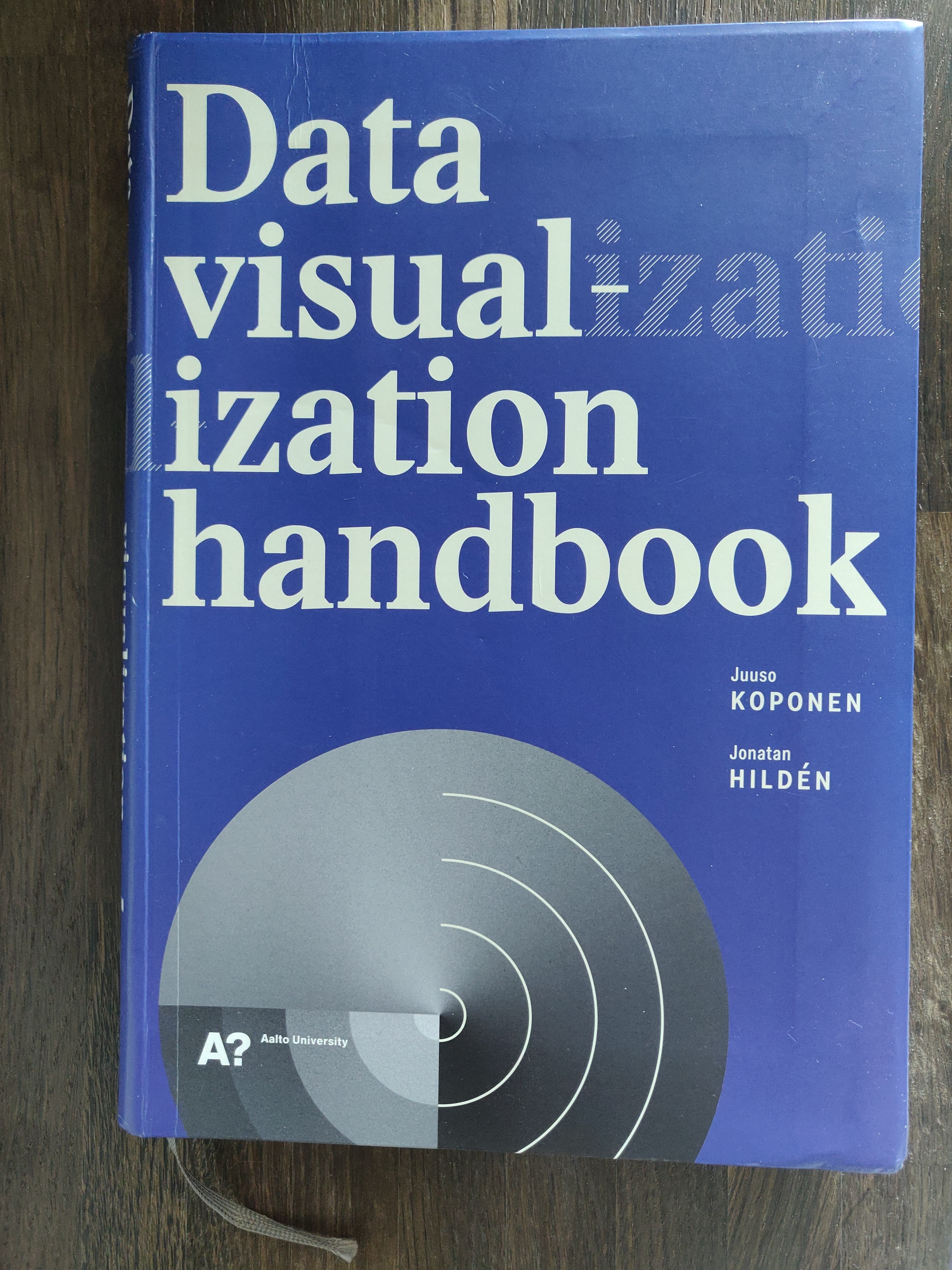 The book is at its best when it illustrates a point with both bad and good examples — and it does that a lot. The fact that a picture is worth a thousand words is probably the explanation to how the authors packed so much information in just 350 pages.

It starts out unhurriedly, talking about categories, symbols, glyphs, and other basic concepts such as scales and encoding methods.

Position is the best visual encoding method regardless of whether the data presented is measured on a ratio, interval, ordinal or nominal scale. Our visual system is able to discern positions in two dimensions very precisely, and in ideal conditions, we can notice positional differences of a fraction of a millimeter. No other encoding method comes close to this level of precision.

From time to time, there’s a general principle articulated:

[A]lways encode the most important data using as effective visual variables as possible, and use moderately or poorly effective variables only for redundant encoding of the data, or representing secondary additional information.

Then there’s a discussion on choosing colors for everything from maps to barcharts taking into account differences in color vision as well as cultural background (e.g. in the US red stands for the right-wing Republican Party — and this usage was not firmly established before the 2000 election, by the way).

As a nice touch, in the chapter on layouts the book shows its very own underlying grid on one page.

One of the examples of picking the right graphic representation:

Data with many overlapping time series is easier to read when it is split into small multiples, than when the same series displayed in a single line chart. An additional benefit is that a separate color key becomes unnecessary.

The part of the book which goes over the different visualization genres is the biggest one, so it has the time and space to examine a nautical chart made from the midribs of coconut fronds, proto-alphabets, artist’s renderings, field guide illustrations, the difference between a pictogram and an ideogram (the latter is a judgement or a request), cutaway drawings of aircrafts, all sorts of maps (like, all of them), statistical graphs and their distortions, network diagrams featuring a reference to the Lord of the Rings, and tractograms (that’s three-dimensional visualizations of neural structures of the brain). This list is, naturally, not full.

To mention one small practical finding:

— from which I learn that if I’m trying to explain something to someone, it’s better to draw it with fewer details, and thus a circle with two dots is the best portrait ever.

The last part of the book steps on a completely different stage and discusses the organization of information design work in (primarily) newsrooms. First, there’s a question of roles. In world-class newsrooms, it turns out, every person participates in all the steps related to putting out a story. But of course that requires finding people who can actually pull it off, which is hard, and therefore what happens more often is having multiple people in multiple roles: content owner (reporter or editor), implementer (graphic designer, illustrator, front-end developer), and information designer (the interface between the former two). The authors argue that in an organization where graphic designers are trusted and respected as much as journalists, the latter role of the intermediary is not necessary, and note that in the world’s best graphics desks graphic designers are given plenty of journalistic autonomy.

The next thing they pick up is the structure of a design project. Looking at multiple models for it, the authors make some general observations like “a successful project does not proceed in a linear fashion from one stage to another, but designers should have a chance to return to earlier stages” and “the designer should be involved in the project from the start”. In the end, they propose their own model of five stages.

Somewhere in the middle they quote Kim Rees, one of the first practitioners of data visualization, on the topic of wireframes and how presenting those looking too much like a functioning website may sidetrack the discussion into an argument about irrelevant visual details:

“Never [use] any color, never. It just doesn’t matter how important the color is, you’re not putting color in. Things that look hand-drawn always help. We do extremely rough-looking wireframes, and then put numbers next to certain things […​]. Strangely, it seems to help […​]”

— so, definitely a circle and two dots for best portraits.

The final part ends with focus on ethics, using the news graphics illustrating Osama bin Laden’s death as one of case studies. There were no photos from the scene and thus all the news outlets only had the same handout from the Department of Defence at their disposal: an isometric drawing of the buildings, some aerial photos and maps. So everyone tried to make it unique and stand out from the competition.

The end result was a gallery of horrors, which will provide teachers of information design courses with discussion material for years to come.

The authors sign off with offering ethical guidelines for visual journalists and information designers.

The amount of special terms and intricate details puts this book firmly into the “interesting for professionals” category (as opposed to “nice for anyone”), but the language is clear and approachable even for beginners. And it’s just pleasant to read and to hold — from the thoughtful use of colors on the page to a bound bookmark, this book has it all.

In fact, it even has a website where you can read the (quite long) introduction chapter as well as check out some posters and tutorials.